Swedese’s founder Yngve Ekström was one of Sweden’s leading furniture designers during the 1950s and 60s. He created one of the nation’s best loved armchairs, the Lamino (1956), a classic furniture icon that remains the top seller in the Swedese range. At Stockholm Furniture Fair 2018, Swedese is now relaunching three chairs from Ekström’s most productive era: Thema, Caryngo and Lamino Rattan.

Swedese’s factory and head office in Vaggeryd, southern Sweden, is home to the Swedese Archive, where all the company’s historical material is kept. From sketches via prototypes to classic original pieces, the archive is an endlessly updated treasure trove of Swedese history. From this rich archive, the company has selected three products that will now be brought back into production, all of which were designed by Yngve Ekström.

“We believe that by bringing back these three classics, we’re meeting the market’s demand for timeless design and sustainability. The three chairs, all of which are very different in their design and shape, also clearly show what a multifaceted designer Yngve Ekström was,” says Sonnie Byrling, CEO of Swedese

The Thema chair was undoubtedly the piece that launched Yngve Ekström’s career as a furniture designer. It was presented to the enthusiastic interior designers at Nordiska Kompaniet (NK), Stockholm’s most fashionable department store, in 1953 and the rest is design history. Thema is an early example of Swedish flatpack furniture design that was cheap to distribute and could easily be assembled by the customers themselves. The chairs were sold as sets of four in one pack, with the tagline “Four chairs in one box”. The unconventional design with crossed legs and low clothes-hanger-like backs is named after Bach’s piano variations. The frame is made from black lacquered birch with a seat and backrest in oak or walnut. RRP: SEK 5,375 in oak, SEK 6,125 in walnut.

Caryngo was a unique collaboration between the two biggest Swedish furniture designers of the 1950s: Carl Malmsten and Yngve Ekström. Malmsten created the basic design and Ekström was responsible for the detailing. The first versions went by the name of “Model Yngve” but were later launched as Caryngo. The armchair’s solid oak frame and deeply sloping backrest are combined with glossy leather on the back and seat. The composition and the contrasts in the design and material choices make the chair feel both playful and serious at the same time. RRP: SEK 12,375

Lamino is one of the most renowned armchairs in Swedish design history. Its comfort and neat elegance are typical of Yngve Ekström’s approach. Over the years, Swedese has updated the iconic design of the timeless original with the addition of new materials.

Back in the early 1950s, a precursor to the Lamino chair called “Kurva” was
available in a version with a seat and backrest made from rattan, and in the
early 2000s the company also sold a Lamino in rattan. Now the rattan
favourite is back from the Swedese Archive – a beautifully elegant armchair
whose natural colours accentuate the laminated bentwood that has been
such a feature of the Lamino and of Swedese since the very beginning.
Lamino Rattan is available as a limited edition. RRP: chair SEK 16,125: footstool SEK 5,875

Swedese is a family-owned Swedish furniture company founded in 1945 by Yngve Ekström and his colleagues. Today the company is owned by Anna Johansson and Julio Patino. All their furniture, for both domestic and professional environments, is manufactured in Vaggeryd and Äng using top-level craftsmanship that has been developed over more than half a century. Thoughtful and strong designs are translated into furniture with minimal environmental impact that should last at least one lifetime. 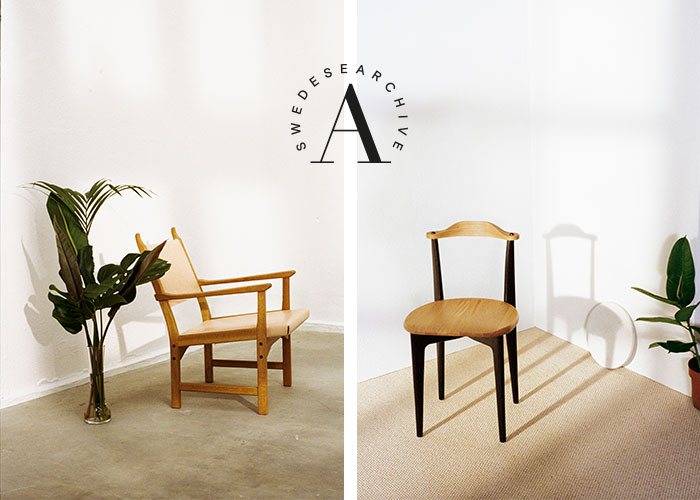 The site uses cookies to help us provide you with the absolute best experience when you visit us. Read more about our cookie policy. By closing this message, you agree to our use of these cookies and that you have been informed.

The Internet pages of the website use cookies. Cookies are text files that are stored in a computer system via an Internet browser. Many Internet sites and servers use cookies. Many cookies contain a so-called cookie ID. A cookie ID is a unique identifier of the cookie. It consists of a character string through which Internet pages and servers can be assigned to the specific Internet browser in which the cookie was stored. This allows visited Internet sites and servers to differentiate the individual browser of the data subject from other Internet browsers that contain other cookies. A specific Internet browser can be recognized and identified using the unique cookie ID. Through the use of cookies, we can provide the users of this website with more user-friendly services that would not be possible without the cookie setting. By means of a cookie, the information and offers on our website can be optimized with the user in mind. Cookies allow us, as previously mentioned, to recognize our website users. The purpose of this recognition is to make it easier for users to utilize our website. The website user that uses cookies, e.g. does not have to enter access data each time the website is accessed, because this is taken over by the website, and the cookie is thus stored on the user's computer system. Another example is the cookie of a shopping cart in an online shop. The online store remembers the articles that a customer has placed in the virtual shopping cart via a cookie. There are two types of cookies: 1) a permanent cookie that is left on the visitor's computer for a specified time, and 2) a session cookie temporarily stored in the computer's memory during the time a visitor is in a website. Session cookies disappear when you close your browser. We use cookies to include improve the user experience of the site. By using our site, you consent to the use of cookies in accordance with this cookie policy. Below you will find a description of which cookies we use and for what purposes.

If you do not want to allow cookies, you can change your browser settings on your computer or other device that you use. If you continue to use the site without changing your browser settings, we assume that you prefer to receive all cookies on the site. Many browsers also have features that allow you to view and delete cookies. Some features on the site may be affected unless cookies are allowed. See the browser's help pages for more information. You can also visit wikipedia.org, www.allaboutcookies.org or www.aboutcookies.org to read more about cookies, such as cookies. how to see what cookies you received, and how to handle and remove them.

THis website contains javascript. It is a code technique that is used to make you, as a visitor, able to experience our website as intended. In short, javascript is needed for images to be displayed correctly, so that menus, forms etc will work smoothly as well as retrieval and sorting of information. As a user, you can turn off Javascript usage in your browser. If you have done this you will not be able to experience the website as intended. Hope you get the most out of your visit to us!